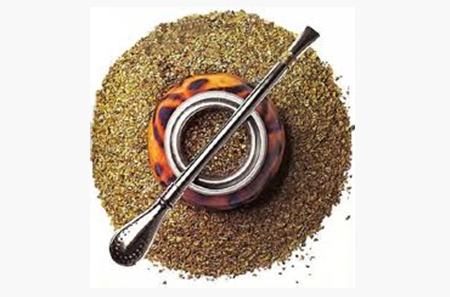 This week our topic is Yerba Mate.  A reader asks:

I was under the impression that Yerba Mate contains a natural stimulant, but is not caffeine.  Then I heard that it Is caffeine.  I do not want to misinform people about Mate.  Please help.

Believe it or not, the information on Yerba Mate and it’s stimulant has changed in recent years.  Originally Yerba Mate was said to contain “Mateine” a property similiar to caffeine but NOT.  After some debate,  most ingredient lables now state that Mate has Caffiene. Chemical composition and properties of Mate contains three xanthines: caffeine, theobromine and theophylline, the main one being caffeine. Caffeine content varies between 0.7% and 1.7% of dry weight[7] (compared with 0.4– 0.9% for tea leaves, 2.5-7.6% in guarana, and up to 3.2% for ground coffee  This mix of three xanthines were previously called “mateine” is a synonym for caffeine (like theine and guaranine).

Preliminary limited studies of mate have shown that the mate xanthine cocktail is different from other plants containing caffeine, most significantly in its effects on muscle tissue, as opposed to those on the central nervous system, which are similar to those of other natural stimulants.The three xanthines present in mate have been shown to have a relaxing effect on smooth muscle tissue, and a stimulating effect on myocardial (heart) tissue

Additional information on Mate is available in the Tea Party Girl article:  https://teapartygirl.com/2011/03/yerba_mate_tea/