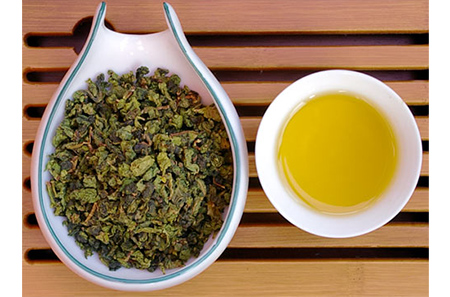 Have you ever wondered what the difference is between various kinds of teas?

The answer is: their production methods.

The very same fact holds true for Oolong teas – there are several different types, all with various ways of being made. The flavor differences in Oolong teas vary according to the length of time the leaves were given to ferment.

Oolong teas are traditional Chinese teas, primarily made in China and Taiwan. They fall into a category between green and black teas in terms of oxidation. However, Oolong teas tend to taste more like green teas than black teas, although they don’t have grassy flavor tones like green teas do.

About 400 years ago in China (at the end of the Ming Dynasty), it is believed that Oolong tea began to be produced. This production is said to have taken place at Mt. Wu Yi Shan in Fujian Province. Oolong teas, when dried out, have a black thread-like appearance.

When an Oolong tea leaf is plucked, it is put to wilt in direct sunlight. Afterwards, it is shaken in bamboo basket. This process bruises the leaf a slight bit, allowing the chemicals in the leaf react with the air. When a desired amount of time has passed, the leaf is fired. This marks the end of the fermentation process. Afterwards, a unique flavor and appearance are evident.

If your tea party friends  want to try Oolong tea, the best way to enjoy its rich flavor and aroma is to drink it just as the ancient Chinese did – using a very small teapot along with a similar sized cup. Many Chinese tea drinkers still use this same method to savor the taste of their tea. The best way to brew Oolong teas is to make them strong and bitter, yet able to leave a sweet aftertaste in the mouth.

There are a wide variety of Oolong teas available on the market. A small sampling is listed below:

This is usually a pelleted tea, popular by the name ‘Iron Goddess’. It’s by far the most popular. It is characterized with its being stout and crinkly leaves. China is the main grower of this tea.

This type is usually strongly fermented and it’s characterized by elongated black leaves. It is light and by far the most floral. This is grown in Taiwan.

It is among the best in Taiwan. It is fairly fermented and characterized by a light but gentle taste.

It is from Taiwan and usually picked in spring. It has a delicate flavor.

This is rare and is processed in Darjeeling India.

Oolong teas are known to have an extremely healthy effect upon the body. These teas contain a great deal of polyphenol, an ingredient that research has found to reduce triglyceride and remove free radicals. This, in effect, delays the appearance of skin aging, such as dark spots and wrinkles. It just may be that Oolong teas are keys to the fountain of youth!

If any of your friends own Chinese restaurants, Oolong tea will be a superb product to sell them. Oolong teas are very commonly served with dim sum and other Chinese entrees. Many Americans enjoy drinking Oolong tea while eating General Tso’s Chicken.  Consider hosting an Oolong tasting party and serving Chinese takeout!  Your friends will love this “creative” tea party approach.

Tea Party Girl Asks:  What’s your favorite Oolong tea and where do you buy it?