Tea is for Turkey and Tenacity 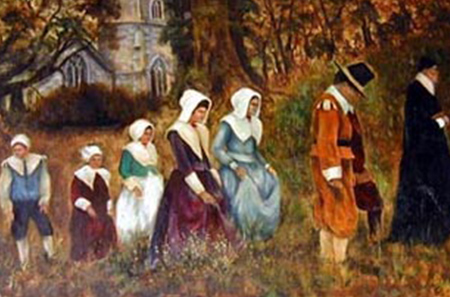 I like to think America’s classic holiday is not just about relishing in our riches. That in the midst of our ‘fullness’ we know how different our life would be if there had not been a band of religious idealists seeking freedom to raise their children without the shadow of the politicized Church of England. 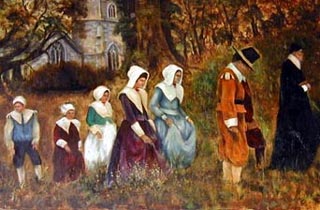 I am particularly connected to this small band of pilgrims as only four of their married women survived the first harsh New England winter and partook in the First Thanksgiving (compared to twenty-two men). One of them, Mary Brewster, is in my direct ancestry 13 generations ago. At the time she had two young boys.

I ‘m not sure I inherited her hearty stock for surviving harsh conditions. She was so intimately acquainted with hard work she named one of her sons Wrestling. I bet SHE could have used a massage!

The story goes that their partnership with the Native Americans ultimately led to their survival. They were able to accept the help of others very different from themselves. Hence, they began to grow corn instead of wheat, burying fish-heads alongside the rows for fertilizer. No Marie Calendar’s cornbread mix for them!

At Tea Party Girl, I write often about how to take the simple beauties of life, make time for them, and live from fullness instead of depletion. However, I also believe, it is often the times of hardship that make us strong, better, and fuller individuals. And it’s the seasons of struggle that allow me to appreciate the simple beauties to such a great extent.

I’m entering this post in Scribbit’s November Write-Away Contest. The theme of the contest was (because, again, squeaking in at the last minute) “My life is different because of…”

My life is different because of a woman who brought her young children to this land and nurtured them through bleak conditions. Who accepted help and was willing to learn from another culture. Myself, I have had to nurture my children and accept help from others who were very different than me through bleak seasons of the soul. Maybe I did inherit some of her tenacity after all.

So, Mary, I raise my teacup to you in honor this Thanksgiving as I dive into all the turkey and trimmings sitting on an upholstered dining chair in a heated home. You are in our thoughts today.