The Truth Behind Teacups and Saucers 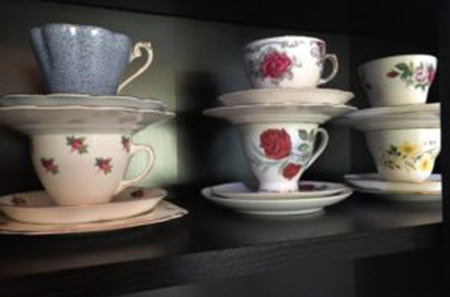 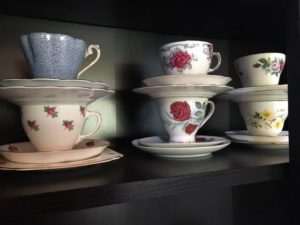 Open nearly any cupboard and you will find teacups and saucers hiding inside.  Even if you don’t use them these delicate cups you won’t want to miss their secret story few are aware of.  In this article we will turn teacups upside down and expose the hidden truth behind their creation.

The discovery of drinking tea dates back to China over 5,000 years ago.  The jade liquid was originally served in small handle-less bowls which contained a mere 2-3 teaspoons.  As tea’s popularity spread through Europe these small bowls morphed to include 4 ounces and a rounded handle.  Many historians believe that the teacup handle was created to shield the fingertips of gentle ladies who would otherwise burn their hands.

The Romans are credited with bringing pottery to England where dedicated British potters slowly revolutionized the teacup.  The process of melding pottery and bone into a fine porcelain took many years to discover.  In time. high quality teacups were made from fine, white translucent porcelain and hand painted by talented, steady handed artists.

So, in the beginning was the teacup.

And man thought it was not good for the teacup to be alone and so he created a partner, a help mate called the saucer.

In truth, the saucer originally came from China through it had nothing to do with tea.  The saucer was a flat somewhat deep centered plate designed to hold sauce.   The saucer was adapted to Victorian tables where many are said to have poured their tea into this shallow sauce dish in order to allow the hot beverage to cool.  Literature often refers to it as taking a “dish of tea.”   After the tea was consumed, the cup was placed back on the sauce dish and removed by tray to be washed.

This was the beginning of a beautiful relationship and a marriage which has stood the test of time.  Unlike a mug, a tea cup always has a mate. The two are inseparable in good society and should never be more than 12 inches apart at any time.

And so, for generations people have collected teacups and saucers. A teacup may have started as a complete set or individually carried “across the pond” by your ancestors.  If only those teacups could talk.  Yet, in some ways, teacups actually have a lot to say if you understand their hidden message.

How To Date Teacups and Saucers

If you take a moment to flip teacups or saucers and look at the bottom you will find a range of unique symbols on the underside.  This symbol offers a date range of when the piece was manufactured plus the factory location where it was produced.

Your first step in the collecting process it to flip the teacup and look at the stamp.  This stamp or short hand signature will offer your initial clue to the maker of the china piece.

if you see a “registration number” only this too can help you find the origin of the teaware. Just use a reference guide or a phone app designed for collectors.

Dating the piece is critical to collecting china.  Here are a few steps to help you in the process:

Each bone china maker had their own crests or emblems printed on the back stamp.  Sometimes, these will include names but most of the times only initials or abbreviations will be found.  Some makers, instead chose to create a crest.  This is especially true with manufacturers who have been around since the early 1800’s.   A bit of research will help you discover the company’s history and unique crest.

Certain words or phrases may also be printed on the back stamp.  Depending on the terms used, the approximate date of a manufactured piece can be determined.  The term “England” for example, means that the piece of china was made no earlier than 1891, as porcelain makers were obliged to include this to comply with the McKinly Tarrif Act.  Much of the time, a date approximation is as close as you will get.  For more accurate dating consult an antiquarian or visit the manufacturer for help.

Another piece of information found on teacups and saucers is the back stamp registry number.  This number system began in 1884 and frequently features the abbreviation “Rd” followed by a number.  Registry numbers will refer to the year a design was registered for public record in order to avoid duplication of design.  Registry numbers are different than the date of manufacture.

Eventually manufacturers employed their own system of symbols to mark dates and names on the back of teacups and saucers.  Royal Worcester placed dots near the crown symbol of their crest in 1891.  In 1903 the dots were moved to under the crest.

Think of the identification system as a treasure hunt.  In order to recognize manufacturers a bit of research and digging may be necessary.

Made In Occupied Japan

Let’s take a look at bottom of the saucer.  One of the most rare and highly collectible stamps (at least in the North American market) reads, “Occupied Japan.”

Japans collectible industry began producing porcelain, ceramics, pottery and china as they sought to rebuild their wartime economy.  Goods produced during this time were marked “Make in Occupied Japan” or simply, “Occupied Japan.”

Items shipped to the U.S. received this marking which today makes them extremely collectible.  Without flipping teacups and saucers you might never know the history of the piece which appeared while rebuilding a nation after war.

How To Begin Collecting

Anyone who wishes to delve into the world of collectible bone china must first be armed with the basic knowledge of who the manufacturers are. This can be quite daunting because there are numerous makers. But the majority of those who produced bone china deemed collectible are British and French and that shortens the list considerably.

Before we look specifically at manufacturers let’s make some personal decisions.  Ask yourself the following questions:

What am I looking for? Color, style, time period, design specifics?

Do I want all my tea cups from specific time periods or manufacturer?

Do I want a set for serving or am I just collecting them to display?

How will I display them?

Each of these questions can serve to hone your collecting experience.  Why waste your time looking through tables of teacups from the wrong time period or manufacturer?  Knowing what you are looking for BEFORE you search will save you hours of time.

With our decisions made, let’s take a look at a three famous manufacturers.  We will start with Shelley.

The Shelley story begins in 1860 when the Wileman family, owners of the Foley works; a large British pottery company built a second location specifically for the purpose of producing fine china. In 1870 Joseph Shelley was made a partner and the firm became known as Wileman & Company.  Joseph Shelley eventually took charge of all the china production.

Shelley focused on getting the best china product possible out of his company and his staff.  He worked on improving quality and building the foreign export part of the business.  Shelley’s unprecedented style probably reached its peak with the art deco styles produced in the 1920s-1930s.

During World War 2, the Board of Trade required that production of English domestic china be significantly cut back, but Shelley s could still produce due to its strong export business, which was permitted to continue. (Making cups produced in the war rare and valuable.)

By late WW2. Shelley’s began producing its best bone china for export, and its reputation throughout the world began to grow.  Shelley china peaked in activity during the mid-1950.

Today the Shelley facilities are no more yet it’s beautiful teacups live on.

What words can describe Royal Albert?

These are just a few of the terms collectors around the world apply to this famous brand of bone chine and tableware.

Albert founded by Thomas Wild in 1896, as a small pottery shop in Stoke-On-Trent – England.  Beginning as a traditional family business Thomas and his sons became world renown for their bone china tea and breakfast sets.

Owning a piece of Royal Albert is holding a moment of history in your hands.  This unique brand boasted links with the royal household from the very start and in 1936 Prince Albert took the throne of England and the factory dubbed its china “Royal Albert Crown China.”   Soon the tableware became known simply as ‘Royal Albert’…

Many early shapes were fluted, and included floral motifs and rich patterns in shades of red. The British fondness for cottage gardens has inspired hundreds of designs. Thomas’ company was the first to create Royal commemorative producing them as early as 1897 to celebrate Queen Victoria’s Diamond Jubilee.

Leading the pack in pottery was the renowned vanguard, Josiah Spode. In 1770, Spode founded his famous Stoke-On-Trent based pottery company through sheer skill and dedication.  Over time, he would revolutionize the pottery industry.

Spodes main contributions to pottery involved the development of a formula that merged fine bone china with under-glaze blue printing.  Today, this innovation seems incidental but in the late 1700’s it was nothing short of world changing!

Before Spode, Chinese porcelain makers were the only potters able to create blue and white teaware.  As a European buyer this meant enduring a slow importing process frought with high tarrifs.

Josiah’s use of copper plates for transfer printing allowed European buyers to purchase teaware at less than half the cost of their Chinese counterpart.  In 1816 The Willow Collection, a blue Italian pattern was introduced and is still popular to this day.

The Spode family also perfected the recipe for creating fine bone china of brilliant, translucent white.  This one innovation inspired new designs throughout the pottery world.  The formula made Josiah Spode famous around the globe.

In recent years Spode has sputtered, closing its Stoke-on-Trent plants and outsourcing without success to Mongolia. However, in 2009 the Portmeirion Group bought Spode and is making every effort to keep this important British brand alive and well.

Known for its deep blue jasper-ware whose motifs are taken from ancient mythologies. Wedgwood merged with Waterford Crystal in 2009.

Royal Doulton was founded in 1815 and was a relative late comer to the china revolution.  The company is known for fine English china.  Company merged with Waterford Wedgwood in 2005 and swallowed Royal Albert back in 1971.  Pieces manufactured prior to the mergers are in greater demand.

Haviland was established by an American businessman from New York who was dealing in porcelain and built a factory in Limoges, France.  By 1873 he was shipping his proprietary creations all over the world.  Haviland is very lightweight and can be extremely valuable.

Manufactured between 1919 and 1960 only this company was originally known as the Star China Company and became part of Royal Doulton before folding in the 1960’s.

One of the last standing bone china companies in Britain.  It was founded in 1775 and remains in Stoke-on-Trent where factory tours are still available.

Resources You Won’t Want To Miss

If you decide to collect teacups and saucers then you will want to start by purchasing the book  Collectible Cups & Saucers by Jim Harran. 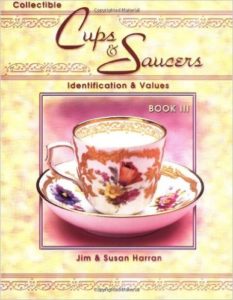 In addition, the book British Tea and Coffee Cups by Steve Goss is particularly helpful should you choose to collect strictly British-made china. 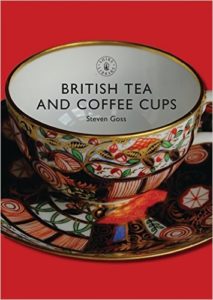 So today as you set your table, why not dig out these treasured teaware sets.  Remember, teacups and saucers are never alone at the tea table, they always invite their friends to join them.

For more information on accessories to go with your Teacups and Saucers, check out this article on some different tea accessories on the market.