What you need to know about organic versus Fairtrade tea

Fair trade in the United States is a system of product certification that enables customers to see that the products they are purchasing do indeed meet the government’s standards.

Many products that must be certified are agricultural products such as tea, coffee, fresh fruits and vegetables, honey, cocoa, cotton, juices, nuts, oil, seeds, rice, spices, sugar, and wine.

The Fairtrade Labeling Organization International, or FLO, is an international organization that audits the producers of such agricultural products to make sure that they meet Fair trade standards. Those companies that do meet these standards can be licensed to put a Fairtrade Certification mark on their products. In 2005, fifty-eight countries were FLO certified. The FLO often focuses on exports from developing countries to already developed countries.

Because most tea is grown on estates, the FLO is concerned about workers that are employed on these. In order for an estate and its tea to meet FLO standards, minimum health and safety as well as environmental standards must be met. This also means that no child or forced labor can occur. Workers must be given fair wages and decent working conditions.

Those people who are advocates of Fairtrade say that the market prices for products do not reflect the true cost of production because of economics as well as environmental and social costs. They tend to believe that Fairtrade will provide an alternative system of trading that allows economical development and better conditions for producers and workers in developing countries.

On the other hand, when you see an organic label on foods at the supermarket, you probably feel confident that the food you are looking at was grown under the strict environmental standards of the government. The United State’s organic seal, which has been around since 2002, guarantees that the fruits and vegetable certified were cultivated without the use of petroleum-based fertilizers or synthetic chemicals. An organic seal on a product also means that it was not genetically modified. But while the organic seal ensures safe environmental practices, it has nothing to do with labor conditions in the country in which the food was produced. 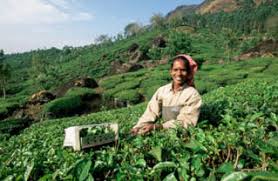 For example, Willamette Rive Organics, which is the biggest organic farm in Oregon, has been served several lawsuits that claimed that the farm violated minimum wage laws. It was later found that the farm exploited underage workers. Another episode took place at Pavich Farms in Arizona. In this case, laborers were not allowed to speak to inspectors. Cases like this pop up constantly. A large organic dairy and potato farm in Oregon, known as Threemile Canyon, is also facing accusations – in this case, sexual discrimination in hiring practices.

Furthermore, workers for organic companies get no higher wages or better benefits. In fact, of 188 organic farms surveyed in California, most did not pat a living wage or provide medical or retirement plans.

Whether or not you wish to purchase organic or Freetrade tea is up to you. But think first about the workers who made it possible to fill your cup with tea.