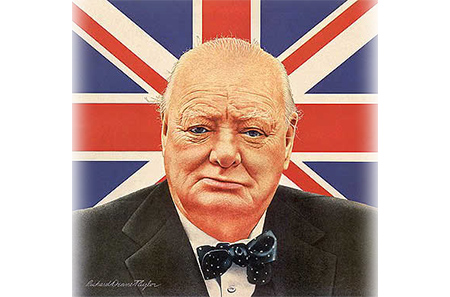 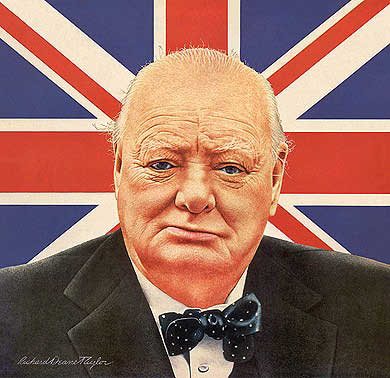 60 + years ago our nation joined hearts and hands with that of the British people.  In a daring attempt to bring freedom to the western world, Sir Winston Churchill and President Franklin D. Roosevelt joined forces.  Their vision; freedom and an end to tyranny, did not come quickly or easily.

1940 saw Great Britain becoming a land of rules, regulations and rations.  In the early throws of war, the English tightened their belt, thrust up their chin and declared “as long as there was tea there will be hope.”

Today to celebrate this tiny islands triumph over tyranny, I offer an ode to England,  “Winston’s Wartime Tea.”

Theme: A Winston tea offers a direct time portal back to WW2 England, 60 years ago.  Gathering ideas for a wartime event is as close as your local library or antique store.  Information can be collected from old Life magazines along with an assortment of wartime periodicals, cookbooks and even websites.

Music: Check your local library for music indicative of the 1940’s.  Be sure to consider big band, Frank Sinatra, Bing Crosby and Benny Goodwin.  If complete authenticity is your cup of tea, you may purchase original radio broadcasts from the BBC.  Search for broadcasts aired during the war years.  Additional information is available at:  http://www.bl.uk/collections/sound-archive/bbc.html

Food: In times of rations cooks get creative, so offer your guests an assortment of ration based foodstuffs.  Interested in recreating recipes from the war?  Take time to explore the internet website   “http://www.british-forces.com  for ideas.

Some personal suggestions include:

In case of war related delays, British authorities recommended all citizens’ travel with a bit of food in their pocket. “Pocket Scones” can be offered to your guests as they leave your home, wrap a small scone in wax paper and tie it with a bit of string.  A “Pocket Scone” makes an appropriate parting gift.

Tea: In 1940, Britain drank teas grown in the Indian tea gardens owned by English companies. Plan to serve a traditional English Breakfast Blend or a hearty Assam at your table. In the customary British fashion, tea should be served with sugar and milk.  Earl Grey (while a very British tea) was an unlikely choice in wartime England; flavorings such as Bergamot were nearly unattainable.

Activities:   Experience the reality of wartime rations by creating a “Shopping Basket.”  In the basket be sure to include the following:

At the bottom of your basket add a note stating that bread, fruit and vegetables were not on ration but were in short supply.  Families were encouraged to “Dig for Victory” by growing their own produce garden.

Your guests may also be interested in British Civilian life, fashion, wartime employment.  This information is readily available at http://www.british-forces.com (Look under WW2.)

Lastly, A Winston Tea is not complete without a few choice words from Mr. Churchill himself.  Here are a few of his best:

“A fanatic is one who can’t change his mind and won’t change the subject.”

“Although prepared for martyrdom, I preferred that it be postponed.”

“He has all the virtues I despise and non of the vices I admire.”

“History will be kind to me for I intend to write it.”

Lady Astor to Churchill “Winston, if you were my husband I would flavor your tea with poison”

Churchill: “Madam, if I were your husband, I should drink it”

Additional quotes are available at http://www.winstonchurchill.org/ along with Winston trivia which makes for excellent ice breakers.

Table setting: Set your table with all things Winston choosing dark somber colors appropriate for a difficult era.  Table props may include:  a small British flag, a few Winston Churchill books, a tea set, a cigar, a pair of reading glasses and a paint palette.

On May 8th, 1945 Victory was won in  Europe yet wartime rationing continued in Britain until 9 years later in 1954.  May we never forget the sacrifice and the true cost of freedom.